Handpangea is an American gathering of Handpan players, makers, and enthusiasts.  I was fortunate to attend both events thus far (2011 and 2012). 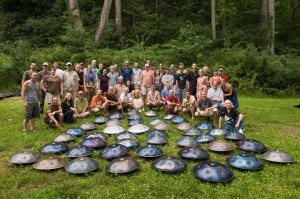 In 2011, I received my SPB just a month prior to the event.  I spent much of my time at Handpangea trying out all of the handpans available.  I believe that I played every generation of Hang and Halo available.  Played a few Bells as well.  Mine was the only SPB present, so she spent much time with others as they explored Victor’s creation.  I had very little skill in 2011 and very much enjoyed watching and playing with others.  I was in awe of the sounds that I heard some players make on this beautiful instrument.  Needless to say, I went home with many new friends and techniques.  I also went home with a deeper appreciation of this instrument and the community. 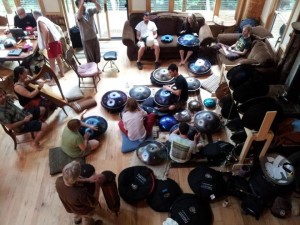 Handpangea 2012
This year was different!  I have spent the last year getting to know the handpan better.  I also obtained a second SPB as well as a Halo… my music is much fuller and more defined.  I am at a different place with my music.  In the past few months, I have decided to become a Certified Music Practitioner.  It seemed that many at Handpangea are on a healing sound journey as well.  The first day was full of conversations about using the handpan in healing as well as the healing properties of sound/music/vibration.  Good stuff going on!  Also this year, I jumped in as many jams as possible in such a short time.  I played several of Victor’s special builds and shared travel stories with friends who have also made the journey to Russia.  I thoroughly enjoyed the time that I shared with my handpan brothers and sisters.

Here is a audio recording of two Halos at Handpangea.  I am trying out Gabriel Goldberg’s Equinox and he is playing my Silverado.  You can briefly hear Janet Spahr on voice.  Good stuff!

For more information on Gabriel and his work:  Gabriel Sound Healing

Here is a video of a jam that I participated in on Friday afternoon.  Played exclusively on Halos by Pantheon Steel in the scales of Aegean, Equinox, Silverado, and Melong Selisir.  I believe there is a Golden Gate mixed in there for good measure…

Many Thanks to Buddy Brinkley for making these videos available!

A journey through the musical life of Robin Burk