Music expresses that which cannot be said and on which it is impossible to be silent.
Victor Hugo

I grew up in a musical family, being taught music at an early age.  I took instruction in piano and violin, never excelling in either.  In 6th grade, it was time to choose an instrument for the band program.  I picked the French Horn.  Finally, something I could play well.  I enjoyed most the part that the horn plays in musical scores, not taking melody but the band certainly would not be complete without it’s voice.  I was the only instrumentalist at my small boarding school, so I often played solos until the band program began in my Senior year.  I truly loved to play the horn parts in Baroque music, especially Bach.  In Middle School, I participated in the Steel Drum Band as part of the school’s band program.  I very much enjoyed this experience and think back to it often with fond memories.  I also played handbells and goofed around on guitar for a bit.
As I went to college, I left my music world behind as I knew being a professional musician was not in my cards.  After picking up the Native American Style flute in my early twenties, I realized how my life had been incomplete without music.  Sure, I listened to many bands and went to concerts.  I even studied while listening to the classical pieces that I once played.  But, my heart was empty after not playing for so long.  This wooden flute opened me up to a new world of music.  Not one of intense study as when I was young, but one of many possibilities.  I began listening to World Music and purchasing ethnic instruments.  These instruments allowed a free flowing of musical expression that I had not experienced before.  Truly has changed my life. 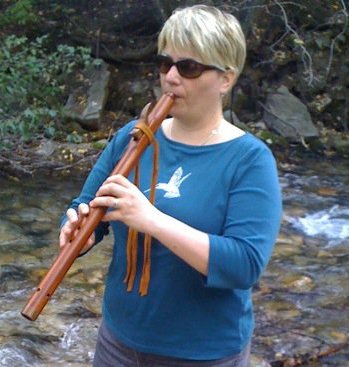